Mindset, the psychological theory that explains why some children thrive in school and why others have a harder time, contributes to our learning across the disciplines. Psychology professor at Stanford University, Carol Dweck, has studied children and has run many tests to research the growth and fixed mindset theory. Children with fixed mindsets believe that they are born with a certain amount of intelligence and talent and they can’t do anything to gain more. One with a growth mindset believes that they can grow their intelligence and learn new things. A fixed mindset and a growth one see(or think of) things differently. For example a fixed mindset avoids challenges, but a growth mindset sees challenges and uses them to learn and improve. Why do some children get a fixed mindset? It could be because of how their parents praise them. “Why Praise Can Be Bad for Kids.”, by Ann Pleshette Murphy and Jennifer Allen, states, “ ‘Parents should take away from the fact that they are not giving their children a gift when they tell them how brilliant and talented they are,’ Dweck says. ‘ They are making them believe that they are valued only for being intelligent, and it makes them not want to learn.’” This evidence shows when parents try to raise their child’s self-esteem by complimenting their intelligence, their child will struggle in the long run. They should praise their children on their hard work, or tell them the truth about why they failed so that they know what to do in the future. A fixed mindset could also lead to a more serious study of psychology, depression. According to an article “Why Mindsets Matter.”, by psychologist and self-help writer Jerry Kennard, it states, “ For a fixed mindset the writing is often on the wall. Once perceived failure occurs there is almost a sense of permanence about it and a belief that they can never get back what is lost. Perceived failure can lead to anxiety and depression.” This statement supports my claim about how a fixed mindset could contribute to depression and shows that a person how a person with a fixed mindset thinks about failure.
Dweck’s findings have contributed across the disciplines. Robert Sternberg, dean of the Tufts University School of Arts and Sciences, says Dweck's research can help leaders as well. “If you’re afraid of making mistakes, you’ll never learn on the job, and your whole approach becomes defensive: ‘I have to make sure I don’t screw up.’”(Robert Sternberg, pg. 5, para. 28). This shows that some people with a fixed mindset who hold a position as a leader will focus on not making any mistakes, but at the cost of not taking any chances to make new, better actions due to the fact they they could go wrong. Another Stanford Psychology professor, James Gross, started linking Dweck’s findings to emotions. In one study, he followed a group of Stanford freshmen as they adjusted to college life. What he found is interesting, “Those with a fixed mindset about emotions were less able to manage theirs, and by the end of freshman year, they’d shown poorer social and emotional adjustment than their growth-minded counterparts”(pg. 5, para 30). This evidence shows that the growth and fixed mindset theory has the same effect as it does adults. It also shows that a fixed mindset not only affects the way we think, but it affects our emotions. If a child keeps a fixed mindset as they become an adult, more problems are bound to show up as they continue working in college or when they get their first job. Some believe that others are born smart, or successful, or talented. But the truth is, we all have the ability to be intelligent, successful, and talented; having a growth mindset will make our lives much more easier and interesting.

"I think therefore I am" means because we can think, we must exist. Descartes' notices that our senses(hearing, touch, ect.) can trick us. He also claims that the things we experience when we are asleep can occur when we are unconsious(dreams). If I were to interpret what he asked himself in my own words, it would be, "How do I know I exist, if I am decieved by my own body's senses?" I learned that the mind is more superior than the body, because it is not limited as the body is. Descartes' then realizes that if him thinking is an  irrefutable truth(it cannot be doubted) and if he can think of his existence, then he must exist. So because we can think, we must exist. 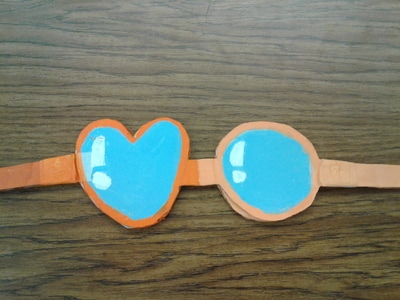 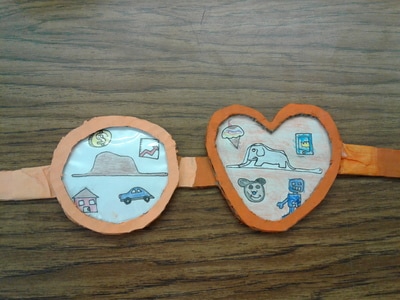 Our art piece, for chapter one of The Little Prince, is about how creative thinking children(the heart shaped lens because children see with their hearts) will turn into bland adults(the typical circle frame with a glass lens). We wanted it to go with our universal theme, change can either be negative or positive, so we colored our glasses orange for creativity; the child frame is brighter than the adult's because they have more creativity than adults, but it fades away as they change into adults. The child's frame is very colorful and has the boa constrictor digesting an elephant(what the narrator saw) from the story; the adult's frame has typical adult things and has the hat(as the adults saw it) from the story. Not only can change be seen in this piece, but also juxtaposition(when you place two different objects together for contrasting effect) and irony(you would think that the adult is more creative than the children, but it is the other way around).

Go to the essay.

"What dose it mean to be American?" Writing Task

I think that there are many ways to answer this. I see an American as one who is born on the soil of the United States. However, this was before I realized about South America and Canada. To define an American is somewhat harder to do. For years I’ve learned that the typical American is one who is born in the USA. I’ve picked this from tv shows, books, ads… as if it was influencing me. When we talk about other places besides the US, it broadens my view of what an American is. I think a lot of people see Americans, whether it be one from Spain, Russia, Japan, etc., as a person who is born in the United States. The “American life” to me is a life without restrictions. The American life I’m talking about is the one that connects to the US American. There are places around the world that place restrictions on the rights of it’s citizens, for example North Korea. Places like this restrict the rights like the freedom of press and freedom of speech. People in those countries CANNOT express themselves or their ideas. The things that one person can think of could be influential, imagine what a whole country, with a whole different perspective, can come up with? I think that’s what makes America so amazing and what defines the “American life”. Life can be whatever you want it to be, you can express yourself and have your own ideas, and the ability to share those ideas with others.

I hear America singing, the assorted voices of the chorus.

Those of India, each one taking part in a mystic Hindustani song.

The Mexicans, dancing to the slow hearty Mariachi music.

The Germans, tuning to an optimistic Volkslieder

While the music of France may be varied...their sense of fashion is one of a kind.

Then there's that feeling of the Irish Trad that words can't describe.

Of course, you could go back to the American Jazz, Blues, and the sort

But where's the fun in that?

We pass down the songs we've learned from our forefathers,

Sharing the joys that they bring us as we receive from others,

Singing a symphony in our America.